Autism Awareness Run: Let's come together for a Cause Indore
April 1, 2017
Blog, Events
BY
iHDteam

Tomorrow, that is, on 2nd of April, 2017, Indore will be witnessing a marathon that is for a cause. A cause that is often neglected a cause that we all need to step forward to. As many of you might not know, April every year is marked as National Autism Awareness Month and this year it will be in its ninth. To mark its presence in a city like Indore, a special marathon is organised to spread the awareness of the same amongst people and the registration is free. At the end of the marathon, certificates will also be provided to people who were a part of it.

What Is Autism Spectrum Disorder?

Autism, or autism spectrum disorder, refers to a range of conditions characterized by challenges with social skills, repetitive behaviours, speech and nonverbal communication, as well as by unique strengths and differences. We now know that there is not one type of autism but many, caused by different combinations of genetic and environmental influences. The term “spectrum” reflects the wide variation in challenges and strengths possessed by each person with autism.

Some Facts About Autism

Without understanding, autistic people and families are at risk of being isolated and developing mental health problems. Autism is much more common than many people think. There are around 700,000 people on the autism spectrum in the UK – that’s more than 1 in 1001. If you include their families, autism is a part of daily life for 2.8 million people. Autism doesn’t just affect children. Autistic children grow up to be autistic adults. Autism is a hidden disability – you can’t always tell if someone is autistic. While autism is incurable, the right support at the right time can make an enormous difference to people’s lives. 34% of children on the autism spectrum say that the worst thing about being at school is being picked on. 63% of children on the autism spectrum are not in the kind of school their parents believe would best support them. 17% of autistic children have been suspended from school; 48% of these had been suspended three or more times; 4% had been expelled from one or more schools. Seventy per cent of autistic adults say that they are not getting the help they need from social services. Seventy per cent of autistic adults also told us that with more support they would feel less isolated. At least one in three autistic adults are experiencing severe mental health difficulties due to a lack of support.

Events and Attraction At The Autism Awareness Run In Indore 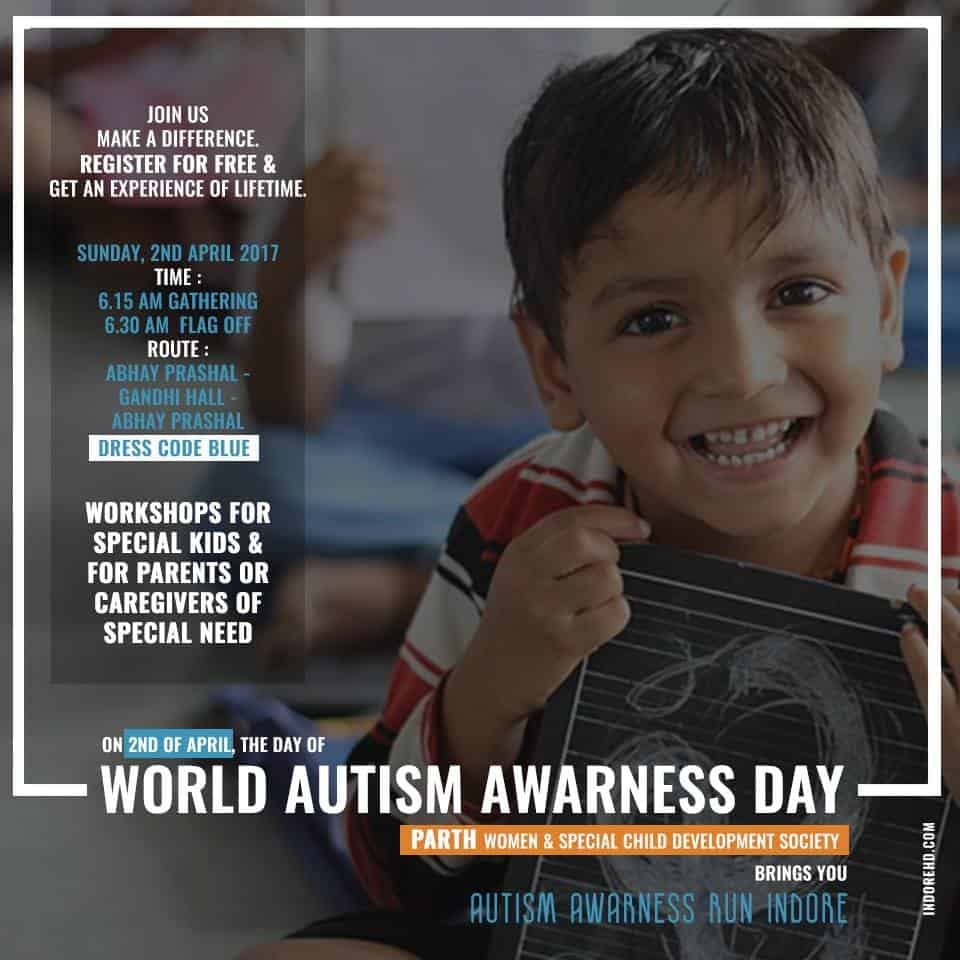 After the marathon, there is going to be a special attraction for kids – The Carnival that will be organised from 11 to 1 PM. Dr. Naina Vaidya and Dr. Shalini Verma are going to take a special workshop for parents and caregivers to shed more light on autism and for the entire guide they will need on the same.

Indore HD urges the people of Indore to be a part of the run and step up for a noble cause.