While the deaf and dumb are said to be differently abled people, there is not much conviction to bring more than hearing aids or sign language in planes to these individuals. While most of us have it quite easy in life and still crib, no one really gives attention to a cause unless it effects them directly in some way. However, this couple from our very own Indore, took up the task of empowering Deaf Women and children. And to achieve which she started teaching deaf and dumb kids, in order to instill confidence in them to go out and face the ‘normal’ world, and leave no stone unturned to make their voice heard.

While there was no deaf friendly police station in India where a deaf person could lodge a complaint in sign language for his woes to be heard, Mrs Purohit’s efforts gave way to a unique integration to the usual police chaukis, and a special department was opened on 7th september, 2002 at Thana Tukoganj, Indore. In the year 2018, Mrs Purohit and her husband also prevented a suicide in Rajasthan via a video call counseling to a deaf lady. Her initiative is catering the needs of entire deaf and mute population of Madhya Pradesh. So far in the span of 20 years time it has attended more than 800 cases. All including police station courts and counseling.

Continuing her path to enable the voice of the deaf and dumb, she eventually moved on woth her quest to make entertainment accessible to the deaf and dumb. Together they’ve dubbed several hindi movies thereby making a real effort to change the scenario and not letting sound be a barrier.

Mrs Purohit has done her B.Sc. in Geology, Masters in Social Work, Diploma in Fashion Designing and Marketing, B.Ed. in Deaf Education, and M.Ed. in Teachers and Special education.

She Composed our National Song Vande Matram in Sign Language and also has been the key person in the composition of national anthem in sign language.

She has been the key mentor in starting residential schools and hostels for Deaf and Dumb children and women in the tribal districts of Dhar, Khandwa and Alirajpur.

She is the recipient of Alex memorial Award for exemplary services for the differently abled community.

She has been honored by Mr. Amitabh Bacchan in his TV Show ‘Aaj Ki Raat Hai Zindagi’ on 15 November 2015 along with her Husband Gyanendra Purohit for the selfless service to the deaf and community of India. 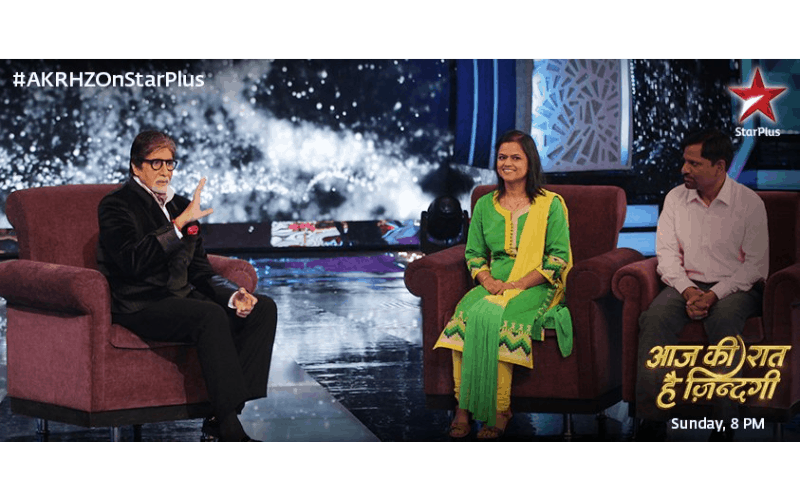 She has also been honored by Rastriya Swayam Siddh Samman by Jindal Steel Foundation on 14 January 2016 for the unique initiative to identify, to reward and recognize grassroots leaders and innovators for their exemplary courage , commitment and confidence that has enabled them to overcome adversities , making them a source of inspiration for many in India.

She has been honored as one of the ‘top 100 women achievers of India’. The initiative was jointly launched by union ministry of women and child development in collaboration with facebook.

She has been honored by the President of India on 22nd January 2016.

She is the recipient of ‘Zee women achiever award’ 2016 for upliftment of deaf children and women empowerment.

She received the Swaraj women excellence award 2016 for upliftment of deaf children and women empowerment.

She is the recipient Gurjar Goud 1st Ratna samman 2016.

She has formed the CODA club of the normal children of Deaf Adults who shares common issues and problems together.

Indore Nagar Nigam has honored Monica Purohit as the best teacher in the special educator category.

The Indore Traffic Police has honored Monica Purohit for her creative contribution to the society of the ‘Deaf Women and children’.

‘Malwa Nimar Badhir Sangh’ also honored Monica Purohit for the best contribution in the field of Deaf education and rehabilitation.

Her initial efforts made the Deaf friendly police station upgrade to another category of disabled people.

The Gynecology society also honored her for the great services for the welfare of disabled women in the year 2015, felicitated by the Lok Sabha Speaker Sumitra Mahajan.

While, so many awards and recognition has made Mrs. Purohit’s efforts reach so many who were unable to fend for themselves, she has indeed set an example that you can begin with changing the world where ever you are. Such is the power of women! Indore HD salutes such powerful, independent women and their undying spirit.